Look out below!!! I’ve got a radish bomb of a post, and I’m dropping it in three, two, one…

Bombs away! I make no claim to be a reluctant rebel leader or avian symbol of same, but this I will promise for what’s to come – there will be art, math, pictures, words, prizes, rhymes, and more, all brought together through the magic of radish inspiration.

To pick up the story where I’d left off a few weeks ago (In the garden, looking back, looking now) , I was recounting the end of my community garden plot for the year, and in the process, I had put forward a contest — Guess the number of radish seeds (and seed pods) that I had collected from the garden, and win some seeds! And radish art!!

How many seeds are in this many pods???

There were four entries altogether, including one that was submitted a little past the deadline and another that was left on Facebook. These ones didn’t follow all of the instructions, but as the contest-creator, participation-encourager, and all-around great guy, I’m going to declare them all valid. Done! Doing so also makes it more interesting, and given the contestant to prize-ingredient (seed) ratio, we can also make everyone a winner in The Ultimate Radish Seed Contest.

To recap, these we’re the clues: 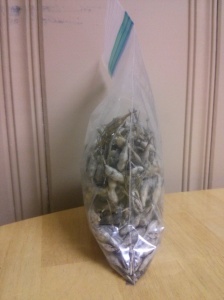 A profile shot of the quart-size bag 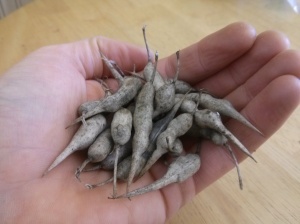 And for reference and math, a picture of a handful of pods…

…and a picture of the seeds from those pods

And these were the guesses:

First prize, if you recall, included not only a packet of the seeds, but also an original radish drawing. Second prize was radish seeds by themselves. The week before Thanksgiving, I was happy to find one farmer at the farmers’ market who was still selling radishes. So I bought a bunch, brought them home, and made a sketch one night.

This particular radish might also be the bomb in the Mockingjay’s clutches above, but I can’t tell for sure. It was, in any case, one of nine good-looking models I had to choose from.

The radish sketch above was actually the second radish drawing that I made. The previous night, I had sketched a small cluster of the seed pods. 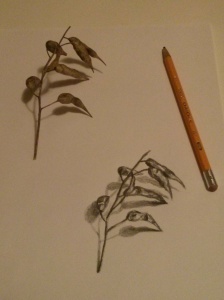 I had overlooked this cluster and another small one in my car. As a result, they hadn’t made it into the seed pod bag along with all the others. That’s a good thing though, because otherwise this drawing wouldn’t exist! And now as there are two drawings, the first-prize winner will have a choice to make: select the one with the radish, or select the other awesome one with the seed pods.

I ended up making a few more drawings – all radish-inspired – but first, back to the contest.

The first step in counting the seeds was to count the seed pods. To do this, I took all the pods out of the bag and then lined them up in groups of ten.

To the right of the pencils, I placed all the full pods. Large or small, as long as they weren’t broken, I put them here. To the left, I put all the broken or partial pods. Any extra pieces, such as twigs or pod-scraps without seeds, went into the non-pod pile above. For the purpose of getting a final tally, I counted each partial pod as a half pod.

And the partial pods

Congratulations, Jim!! You won second prize. And did so with an impressively close guess.

But what about the number of seeds?? Let’s take a look. I noticed that at least a few of the contestants used some math for their guesses – Jane with a 6 seeds/pod multiplier, Galina with a 4 seeds/pod multiplier, and Jim with a… 2.70833333333 multiplier. Based on firsthand knowledge from doing the clues, I thought there would be about 5-6 seeds per pod. And that turned out to be about right, but only if I included just the larger and the most dried out, lightweight, and maraca-like pods. The bag contained a variety of pod sizes and types, and I included them all.

As I was opening the the pods, at first I was disappointed that they weren’t all perfect maracas and didn’t all have lots of perfect seeds. But then I reminded myself that it’s okay for things – for nature, for people, for anything – not to be perfect, and that it’s the actually imperfections that make things real and good. To wish or demand otherwise would be to seek something that’s not there, and to court the opposite of peace and happinesses. As I was tallying the seeds, I tried keeping that in mind. 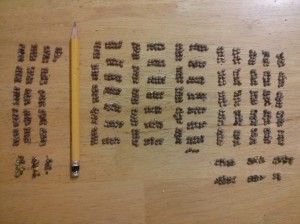 All the seeds from the pods

And so the final number of seeds??? Good question! The picture above shows 852 seeds, and I collected another 75 seeds from the bottom of the bag (they had already fallen out of their pods), so that makes for a grand total of 927.

Zoom in on the picture, though, and you can see that the (250) seeds to the right have a different, potentially nonviable aspect to them, and the ones down below (27 on the left, 54 on the right) have more of that. There was part of me that didn’t want to include them – they weren’t perfect! and it wasn’t how I’d planned it in my head (my radish-contest exuberance and seed-saving inexperience had me thinking I was going to find only viable seeds and so would only have perfect seeds to count). In the spirit of acceptance and imperfection, though, I say let’s count them all. So there you have it: 927 seeds.

And with that, I have one more thing say: 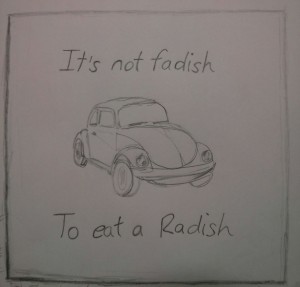 Actually, including that one, I have seven more things, or rather seven drawings with radish wisdom and gusto. Like the discovery of the radish flowers in the garden, and the development of the contest that followed, the following additonal art series wasn’t planned at the beginning but rather happened happily along the way.

For your enjoyment, and for the radish growers of America, if and when they decide it’s time to form a national radish promotion council, here you go, the full series. Enjoy! 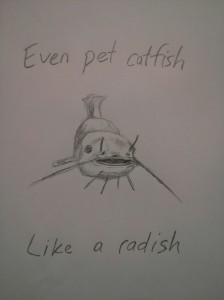 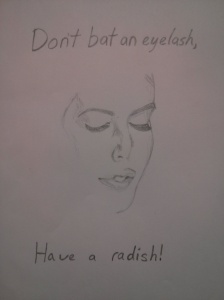 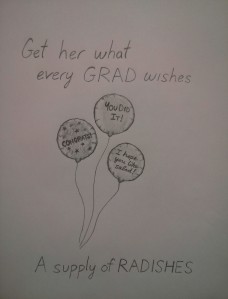 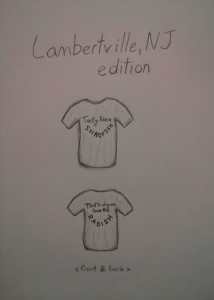 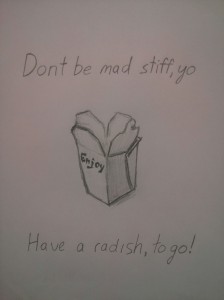 2 thoughts on “The Art of a Radish Seed Contest”