It’s going to be the best year yet!

I honestly believe each of those statements. I also believe in pausing from time to time to reflect on where you’re at and what you might do differently to keep moving forward along the path of progress. What better time to do that than at the turning of the year?

Yes, there are naysayers who may naysay that it’s an arbitrary point in time, or that few people keep the resolutions they make, or that the resolutions made are not specific enough, or something else. I think that any resolution you make is a good resolution, and if it is not completed or is partially completed come the end of the year, that’s okay. We do what we can and are ready for, and then we can reflect and make goals anew.

I’ll probably write some resolutions or goals for myself in the coming weeks, around the general categories of work, blog, personal, and fitness, and I know many of them will sound similar to ones I’ve written in the past. That’s okay. In the meantime, and in the longtime, I actually already have three that I made on New Year’s Eve to keep in mind.

I was hanging out with my brother and his family, and we went across the street to his neighbors’, where they were having some neighborhood families over. The scene was this: a gang of kids, mostly 3-6 years-old but some younger; a group of adults, mostly parents but some who were not; an impressive array of food and alcohol; and toys and confetti everywhere. The kids ran around taking part in mostly self-directed and periodically structured-fun (self-directed: collecting confetti into hats, counting down from ten, and screaming Happy New Year! and tossing the confetti in the air, and then repeating many times; structured: gathering as a group every so often so a few kids could stand under a balloon (and so the other kids could watch) as the host mom did a countdown and then popped the balloon, unleashing a shower of confetti and commensurate kid-delight). The adults, meanwhile, mostly took part in self-directed fun, also known as eating, drinking, talking, and making comments on things like the presence of Pitbull, the absence of Dick Clark, and what Taylor Swift was thinking or not thinking when she decided to wear or not wear what she did and didn’t.

It wasn’t structured-fun in the same manner as the kiddie-confetti-balloons, but the adults also had the opportunity and periodic peer-encouragement to write answers to the following four statements and to then clothespin the separate cards to the line:

A sample of some the early responses

By the time the encouragement made it to me, there were about 30 minutes left in the year. It seemed like the options for answering the cards were to think of something funny or honest. Not yet in the mindset of wanting to go real, I tried thinking of funny. The led to my first response:

Okay, so not really that funny, but more like a meta-jab at myself and the game. I wasn’t going to give up and not fill the cards out, though. I was going to do all three (I didn’t realize until yesterday that there was a fourth), and I was going to do them before 2014 was over. Five minutes later, after continuing to make little progress on funny, I filled in the second one:

I’ve given blood three, maybe four times in my life. The first one or two times were fine, as was the most recent time. But the second to last time, a few years ago… It took me 15-20 minutes to give the pint (twice as long as usual), and it involved, part of the way through, me starting to feel really hot and then light-headed. This was remedied in the moment by being laid back and something cool being placed on my head, and then me finishing the giving that way. But the memory stuck with me and planted a seed of fear that it could happen again. Yes, it probably didn’t help that I had ridden my bike to work that morning and that it was 30 degrees outside, and that I was still feeling somewhat cold when I walked downstairs two hours later to give 🙂  Such are the learning experiences of life. In any case. Donating blood. 2015. I could do that. Actionable and accomplishable. Card number two: done. And then the last card – what should I put? “The person I want to be more like this year is _______.” Pitbull was already taken. So were some other celebrities, including some with additions, like, “A less slutty version of Taylor Swift.” I had the card in my hand for ten minutes, at first still trying to think funny, and then trying to think anyone, when I found the most honest answer:

My brother looked at it and said, “Philosophical.” I said something like, “It’s the answer that makes the most sense.” This one also doesn’t come with lots of ready benchmarks, but it captures a lot. I’ve gotten better at being myself, but I also know I can do more. It all boils down to fear and courage, and listening, knowing, and sticking with it. Being afraid, not being confident, being worried about what other people think, not listening to myself and what I really want to do and what makes me happy in terms of work, play, relationships, goals – all of that is not being myself. The person I want to be more like this year is myself. And that’s to say: not being afraid, being confident, not worrying about what others think, listening to myself and what I want and what makes me happy – in work, play, relationships, goals, and everything. 2015 is going to be the best year yet, and part of the reason is because I’m going to be like myself even more.

On Saturday morning I was walking around town and saw a flier that said, “Blood Drive: Sunday January 4, 2015 – 9:00 am to 3:00 pm.” By the time I saw the flier again later in the day, at another spot, I already knew I was going to do it. I felt a small current of memory fear, both then and the next day, but that was to be expected. When the appointed time came around on Sunday, mostly the good history repeated itself. It took me 10 minutes to give, and I felt good (I only got just a little warm right at end when the machine beeped, saying I was done). So, I may have gone running three hours earlier in the day before giving. But – I did have a lot to eat and drink right after running, and I also got more ready this time. And it worked out. 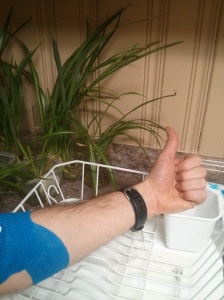