It’s been two and a half years since the intro guitar class I took at the Princeton Adult School, and I’m thinking back now with fond memories of the first class.

I had signed up for “Folk and Popular Guitar 1,” which went for about an hour on Tuesday nights and which was immediately followed by “Folk and Popular Guitar 2,” which also went for an hour. The level 1 class was at or near capacity, while the level 2 class apparently only had a few people. The same person was also teaching them both, the wonderful and energetic, CM (I’ll use her initials).

Towards the end of the first class, she had us take turns introducing ourselves, saying why we were taking the class and if we had ever played before. At one point, when someone would say they had played in the past, she started to respnd by saying enthusiastically, “You’re promoted!”

Even though I had only tried playing briefly (for a month or so) many years ago, I got the same response when it got to my turn.

“Have you ever played a chord before?”

I decided to stay for the level 2 class that followed that night, and though the pace seemed a little fast for me, I figured I would go with it. So I switched. I’d be learning more, and fewer people in the class would mean more attention from the teacher.

Both of these things turned out to be true, as did the following experience: the experience of me getting frustrated many times when I wasn’t picking something up right away, like a new strumming pattern, a new chord progression, or whatever else. I was like, “Why can’t I do this? Why can’t I do it right away? Why can’t I keep up? I should be good at this immediately and never have to struggle or get frustrated or make any mistakes along the way in order to learn and get better!”

I know – it’s the height of unreasonableness to expect something for nothing.

I did keep at it though, and I kept learning and improving with each class and with the practicing between the classes. I’ve kept it going since then too, as I’ve continued to play, practice, write songs, and let go a little. I wouldn’t say irrational thoughts are completely gone, but the wall of perfection isn’t quite as high as it used to be. 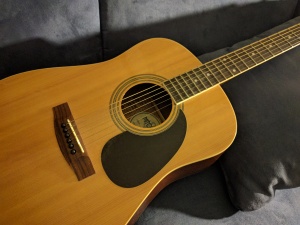 The point is to relax, trust yourself and where you’re at, and keep going. Keep working at it, and see what happens. It’s hard to imagine my life today without all the things that playing guitar, playing with words, and being musically creative bring.

I wrote this song last fall, but it’s a spring song, and here we are still in spring. I used to hate listening to the sound of my recorded voice, but listening to this song makes me smile. It also makes me want to sing along, which I will admit I have done several times.

Thank you too, CM, for the strumming start, and thank you to the many others who’ve provided inspiration along the way.

Butterflies in the wind,
See how they move,
Floating here and there,
Dancing as they choose –
Moving higher
Spreading wider
Flapping happy and
Smiling all around and,
Searching meadows and
Sending hellos and
Loving clovers and
Going flower by flower and

Can you see it here,
Can you leave the ground,
It’s all around us here

Children laughing in the rain,
Skipping on their way,
Puddles without umbrellas
Favorite kind of day –
Bounding on and
Showers of fun and
Loving jumping and
Running all around and,
Telling secrets and
Making keepsakes and
Loving feeling and
Greeting everyone and

Can you see it here,
Can you hear the sounds,
They’re all around us here

Playing music in the park,
Singing lullabies,
Every day a melody
Of seasons passing by –
There’s winter warming and
Flowers forming and
Spring on tour and
More there to come and,
Weather wither and
Brother sister and
Loving whispers and
Kisses every day and

Can you see it here,
Can you hear the sounds,
They’re all around us here

And summertime and whipoorwills and
Ice cream days and evening thrills and
As the days come fanciful and
Say ‘Let’s go’ all whimsical,
The winds are full and filling sails all true,
Wishes real and coming back to you