I hadn’t thought about what to make for dinner, and as I walked past the pumpkins and into the kitchen, I saw it. There, still sitting on the shelf and still in the box, was the new, Oxo Good Grips shredder that my bother and sister-in-law had given me for the holidays and that I hadn’t opened yet… despite having had numerous cheese shredding opportunities in the past month… because I was waiting for the perfect occasion and dish that would not only involve shredding, but would also taste great and make for a great story. I know, such a burden to place on a kitchen implement!

As I stood in there in front of the box, with the kernel of these thoughts in mind, I made the following decision in a matter of seconds, almost without thinking: “I’m going to make risotto tonight and use the shredder, and however it turns out, I’ll write about, and it’ll be fine. It’s time.” 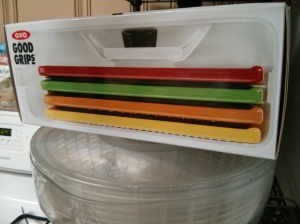 There is simple-risotto, and there is more-complex-risotto, and I decided to try a version more towards the simpler end of the cheesy arborio rice spectrum. Which is to say, I decided to add carrots and red peppers to the mix. Doing so would add some color to complement the peas, a more traditional risotto ingredient (along with the rice, broth, wine, and Parmesan cheese), and it would be something new for me. Here’s the recipe, as I wrote it up afterwards.

One of the great things about making a decision and just going with it is that it’s a lot more freeing than the alternative. There’s no agonizing over what the ‘right,’ best, or dare I say, perfect, thing to do is. And as it often turns out, that initial instinct or feeling often is a good guide. This is not to say I’m the greatest at doing this, and along the way I will have my share of second-guessing (darn you second-guessing!), but I know it’s there for me to access and to try using when I can.

In the kitchen that night, I wasn’t second-guessing my decision to use the shredder. And even though I was trying something a little new, I’d made risotto before, and I had faith that things would turn out alright.

And with that mindset, I began. 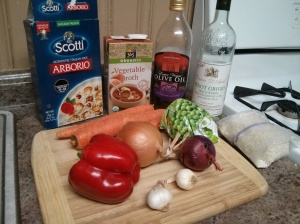 The first step was to sauté the onions and garlic:

How about the early color, right??? Looks good! Color, yes! Correct order, however, no. There was a part of me that wanted to believe that it would work – that I could add the carrots and red peppers at this point and have them cook and soften during the the successive simmer steps, and that’s why I had decided to try it – but almost as soon as I added them to the rice, and definitely while I was stirring them in, I knew I had made a mistake (or rather, we might say, a *learning experience*). I should have sauteed them first. But now they would still be crunchy when the rice was done, and with risotto, it’s more the arborio rice that’s supposed to be the slightly crunchy star.

With nothing to do but smile and chuckle (and if I’m being honest, there may have been some eye-roll too), I then went about picking out, piece by piece, all of the little carrot and red pepper pieces I had just stirred all the way in. As I did this, I also continued cooking the rice, adding 1 cup of broth/water at a time. The piece by piece effort also reminded me of a good ninth grade summer memory of doing a 3,000 piece puzzle of Versailles, most of which involved a picture of the garden. It was steady family work, one piece at a time, and though sometimes it was hard to feel the progress along the way, the progress came, and the puzzle moved forward.

Yes, I picked this much out by hand, one piece at a time.

After sauteing the carrots and red peppers I’d removed – I’ll estimate I got two-thirds of them out – and returning them to the pan, the risotto was almost done. I bestowed the other third of them with ‘soft enough’ status, as they actually did cook a bit, and then I got the shredder out to do the Parmesan cheese. (You can do a vegan version too of course, without the cheese. If you do this, maybe use broth instead of the water, and adjust the salt and pepper accordingly to your liking.)

And then it was all done! And time for some portraits.

The shredder, with an interesting risotto color mimicry 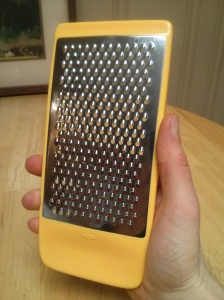 And on the plate

In the end, the vegetable combination worked out pretty well – the risotto had good taste and good color. And it was the taking of a step, jumping in, and going with the experience that had worked to get me started and got me through. What’s that saying again? Yes. The proof is in the pudding. And the reason is in the risotto.

2 thoughts on “The reason is in the risotto”