It’s a new year, and it’s time for some new potatoes.

For a new recipe, that is,
With potatoes.
And apples.
And onions. 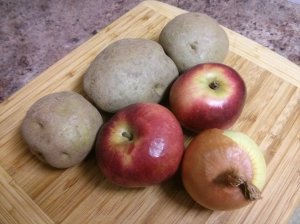 According to my notes, I actually made it for the first time in late December. I’ve been playing with it in January though, and let me tell you, it’s a good one to play with since it tastes really good. Sweet, salty, rich, and tart. Sometimes together, and sometimes one after the other. What’s the secret? The three title ingredients, and the white wine and all the rest.

I took some pictures and made a drawing along the way, too. 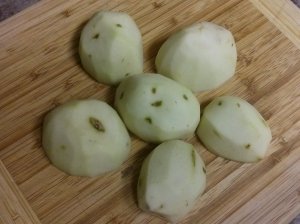 Three potatoes, peeled and cut in half

Aka, Potato pinwheel.
Or, Spud-sun.

Say what you may, but sometimes potatoes just gotta speak for themselves. 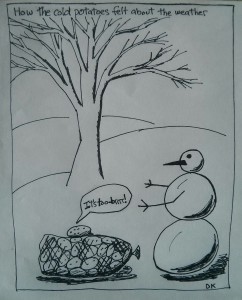 Can you tell I just took a cartooning class?

But back to the recipe – yes, this is a good one, and easy. I sliced the potatoes and apples into relatively thin pieces (white potatoes and macouns, but you could use other ones) and used the wine that I had on hand (Pinot Grigio). You could skip the butter if you want to make it vegan – it tastes good with or without it – and you could also scale it up if you want to make more. The first two times I made it, I also used more olive oil (2 Tbsp one time, and 1 1/2 Tbsp the other time), but I found that 1 Tbsp also worked, so that’s what I included here with the recipe. 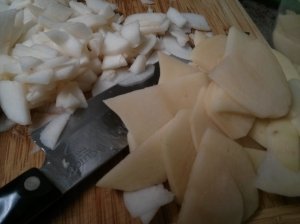 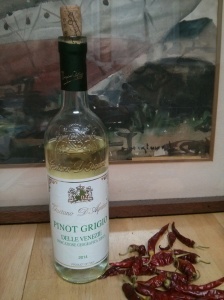 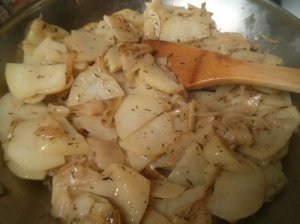 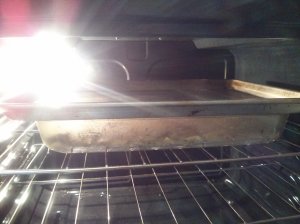 Yes, that’s a baking sheet on top of a baking dish. 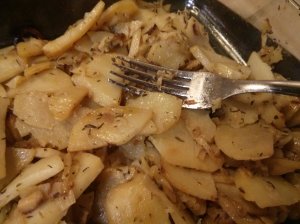 The last step, after letting it cool for few minutes, is to summon the foundations of self-restraint and not eat it all right away.

Or, just go ahead and keep eating.

I’m practiced in both. 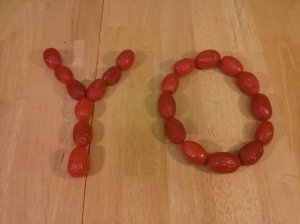 At first when creating Today we answer the question: Tomatoes: Salad PARTer or Conversation stARTer?, which later also took the twitter title, Tomato story-time with @SnoopDogg and other featured word players, I was thinking I would provide some tomato context as part of it: Garden tomatoes picked before the last frost. Left to sit on the table as they ripened. Two months pass. Two thirds remain. Wrinkled prunes on fire. Ready. Waiting. To tell their story. One word, next word, next word, Go!

The story and art were good on their own though, so to this next post the artist’s statement did go. Plus, there’s a selection of tomato photo shoot outtakes. Yes, here we are now, behind the scenes.

Some of you may remember how my table looked two months ago after the final garden harvest. 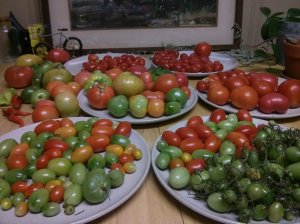 Then from October to December, we went from green to red, and six plates to four. 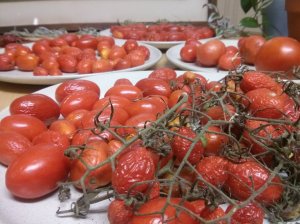 The amazing thing is how all the tomatoes turned red! I did have to toss a few along the way, but that was to be expected, and beside the point. Per past farmer advice and personal experience, a tomato, picked green, does not ripen. “As long as it has a little color, even the tiniest bit, it’ll turn red, but if it’s all green, it’ll stay green.” Apparently my table, the air in my kitchen, the soil in my garden, and/or the tomatoes’ latent lycopene desire to talk and tell stories won out. Some type of tomato magic you might say. Some internet research now also tells me that green tomatoes, particularly those of a more mature size, do have the potential to ripen. But nonetheless, little green grape and paste tomatoes, turning red!

Perhaps they were waiting for the big stage. 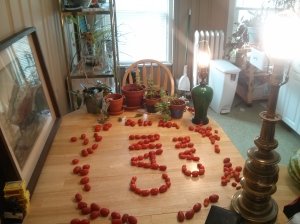 Or hoping to impress some raisins. 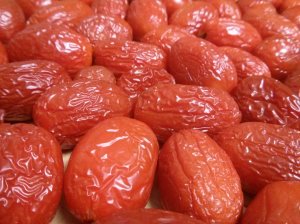 Or looking to take a ridic rhyme time pic. 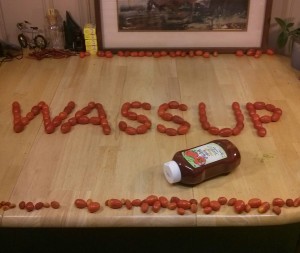 In any case, the tomato party continues. Initially I had been thinking that once the story was over, I’d come up with a good tomato recipe and use the tomatoes in it. Now I think they’ll keep me company for a while longer. 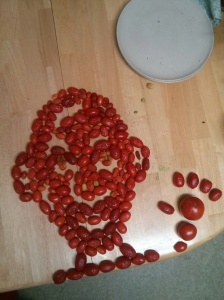 What happens when you use every single remaining tomato.

Hey, how’s it going? Good to see you.